STAGE DE DO IN

Postgraduates at the Film, Theatre & Television Department of The University of Reading welcome you to their eighth annual conference : JAM 2010

THE AUDIENCE SPECTACULAR: Who's watching and how? Ideas of audience in screen media and performance

CALL FOR PAPERS : Rapidly emerging technologies and the effects of globalization continue to shape the work of those practitioners concerned with re-positioning the viewer, and impact strongly on developing discourses within the fields of audience theory and spectatorship. Our dynamic role as audience members and groups, responding to a wide variety of forms, is fore-grounded with increasing urgency across media, prompting a dismantling of traditional models of engagement and re-energised theorization. JAM 2010 will aim to investigate audience identities across a range of media, practices, and critical discourses. We want to address the spectating, experiencing and participating audience member as well as thinking about the role of audience member as something we perform, consciously or otherwise. Journeys Across Media 2010 is the 8th annual conference for postgraduates, run by postgraduates working in the Department of Film, Theatre & Television, University of Reading. We welcome proposals that address what it means to be an audience member today, framed by some of the following concerns :
> Aesthetics
> Genre
> Narrative
> Representation
> Interaction
> New technologies
> Community
> Medium specificity
> Practice as research
> Liveness
> Activism
> Relational space
> Documentary

Proposals for practice as research presentations outside the twenty minute format will be considered.

Journeys Across Media (JAM) is an annual one day interdisciplinary conference organised by and for postgraduate students. It provides a discussion forum for current and developing research in film, theatre, television and new media. Previous delegates have welcomed the opportunity to gain experience of presenting their work at different stages of development in the active, friendly and supportive research environment of Film, Theatre & Television at the University of Reading. Non-presenting delegates are also very welcome. Journeys Across Media is supported by the Standing Committee of University Drama Departments (SCUDD) and the Graduate School in Arts and Humanities, University of Reading.
- -
Dr. phil. des. Rainer Brömer
Mainz University and Medical Centre
Phone +49 (0) 6131 39 36071
Fax +49 (0) 6131 39 36682
mobile: +49 (0) 178 1379274
e-mail: Rainer.Broemer@gmx.de
Publié par association des Chercheurs en Danse Aucun commentaire:

EPOP - Popular Roots of European Culture through Film, Comics and Serialized Literature is a research and popularization project funded by the European Commission in the frame of the Culture Programme 2007 and is promoted by the Department of Music and Performing Arts of the University of Bologna (Italy), the Faculty of Humanities of the University of Limoges(France), the Pallas Institute for Art Historical and Literature Studies University of Leiden (the Netherlands), the GRIT (Groupe des Recherche sur l’Image et le Texte) of the Catholic University of Louvain-la-Neuve (Belgium), and the Cultural Affaris Department of the Province of Pescara (Italy).

The EPOP project deals with the serial fictions produced by European culture industries between mid-XIXth century and early XXth century and aims to surpass the cultural and linguistic boundaries that have until now prevented a true appraisal of the continental dimension of this phenomenon by establishing a transnational network of researchers and institutions working to promote a better knowledge of this particular cultural heritage among EU citizens.

Celebrating Jean-Georges Noverre 1727-1810: his world, and beyond

The 12th Oxford Dance Symposium examines aspects of the life and works of the French-Swiss choreographer and dance writer Jean-Georges Noverre, his contemporaries and successors, his detractors and his champions. Trained in Paris by the great Louis Dupré, Noverre went on to work in the opera houses of Paris, Lyons, Strasburg, Stuttgart, Vienna, Milan, and London, taught such future stars as Gaetan Vestris, Jean Dauberval, and Charles Didelot, and crossed swords with several more including his former pupils Gardel and Dauberval. Noverre’s claims to be an innovator and reformer in many aspects of dance have lasted virtually unchallenged until recent times.
This conference brings together an international group of scholars and practitioners to look at his work in England, Europe and beyond, to present new evidence about his life, to examine some of the works he created for the theatre, and to place his importance as a choreographer within the larger picture of theatrical dance history. 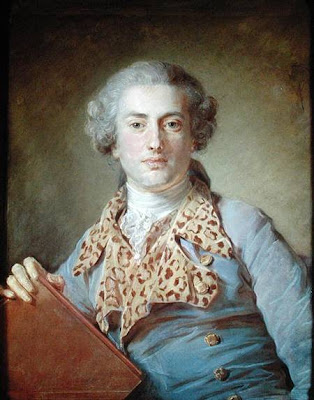 Postgraduates at the Film, Theatre & Television Department of The University of Reading welcome you to their eighth annual conference: JAM 2010

THE AUDIENCE SPECTACULAR: Who's watching and how? Ideas of audience in screen media and performance

for about one year we have been working on the research project “Visualizing (the Derra de Moroda) Dance Archives” in the department for dance studies at Salzburg University. Some basic functions of the animation software are already available. For example, it is now possible to produce simple animations with the evolving tool.

Recently, the new web site of the project went on-line. It provides information on the project's background, aims and the employed methods. Additionally, technical details of the ongoing development are summarized and these will be updated on a regular basis.

Especially you should visit the example pages, where you can observe some animated video clips. These will introduce you to the concepts of movement analysis employed. They demonstrate, how these concepts are translated into the software and how they influence the properties and stylistic qualities of the visual animation result.

Looking forward to seeing you on our home page.
URL: http://www.movement-notation.org/VisualizingArchives